Once the screen arrangement and layout have been created the content can then be programmed.  Content programming tells the player what content to play in each of the layout zones. The content programming is also where content can be synchronized across zones. Keep in mind, a zone can be aligned with a single screen, multiple screens or all screens depending on your layout and screen arrangement. Programming content into a specific zone will scale that content to the size of the zone, even if the zone spans multiple screens.  Refer to the Creating and Editing Programs solutions.

3.  The same content asset playing all each screen (video tile).

4.  The same or multiple content assets spanning some screens.

Note: Content transitions are not supported by the EnGage multiple output player.

No matter what the desired program model is, start by creating a new Program in the Studio section of EnGage.

Select the Multiple Screen layout created in the previous steps. 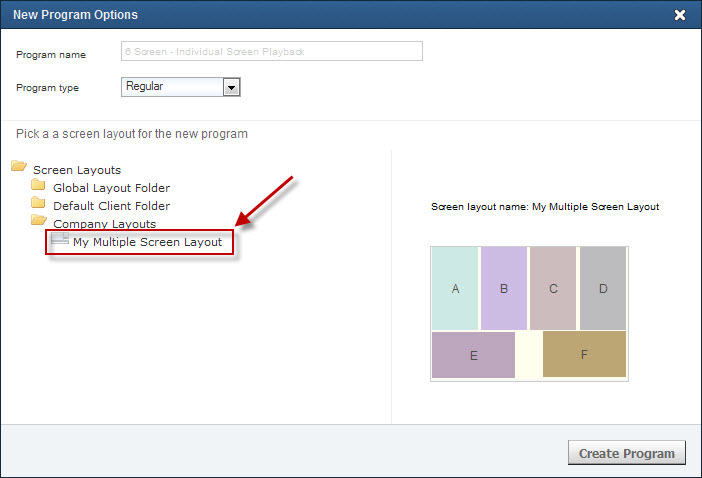 The content programming for multiple screens is very similar to programming content for a single a screen setup but there are some subtle details that will help avoid playback quality issues.

To start programming, simply drag the content from the area on the left of the window into the zones on the right. Use the thumbnail of the layout in the bottom left corner of the window as a reference to the layout zones.  Keep in mind that all content (with some exceptions when using flash) will scale to fit the size of the zone both vertically and horizontally. 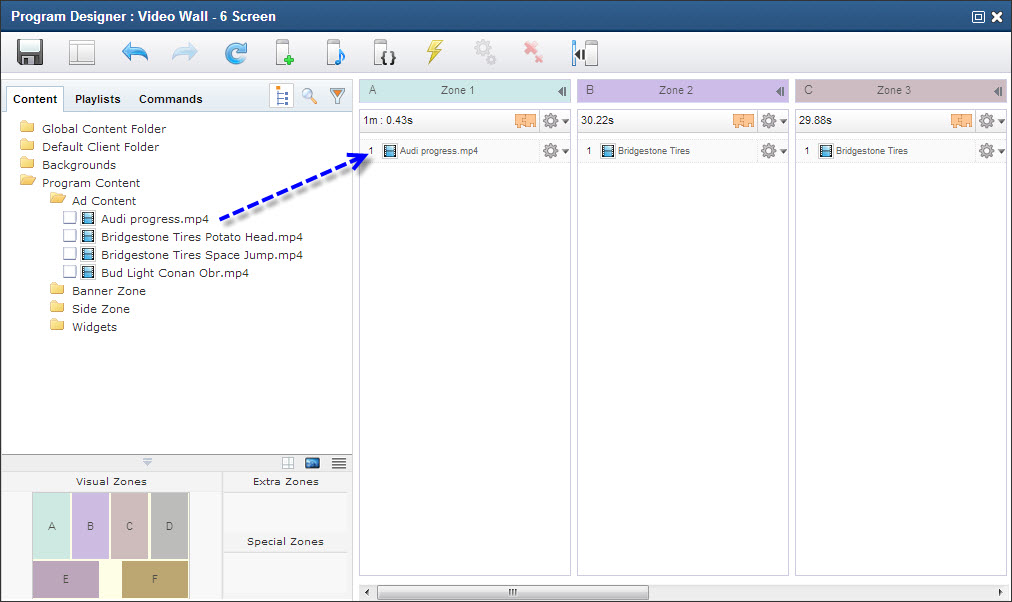 Once the content has been added to each zone, save the program and proceed to adding the program to a Timetable.

If the intention of the programming is to have some content play across all screens and sometimes play content across individual or some screens, take advantage of the “Full Screen” command. Any content listed after the “Full Screen” command will play across all screens. Return to the previous layout by adding the “Restore Zone Layout” command.  All other zones will effectively be paused until the “Restore Zone Layout” command is issued. Content playback will continue from the point of which it was paused in the other zones.

Add the “Full Screen” command by dragging it into a zone. The commands can be found under the Commands tab in the Default Commands->Zone folder.  Content listed between the two commands will play across all screens. 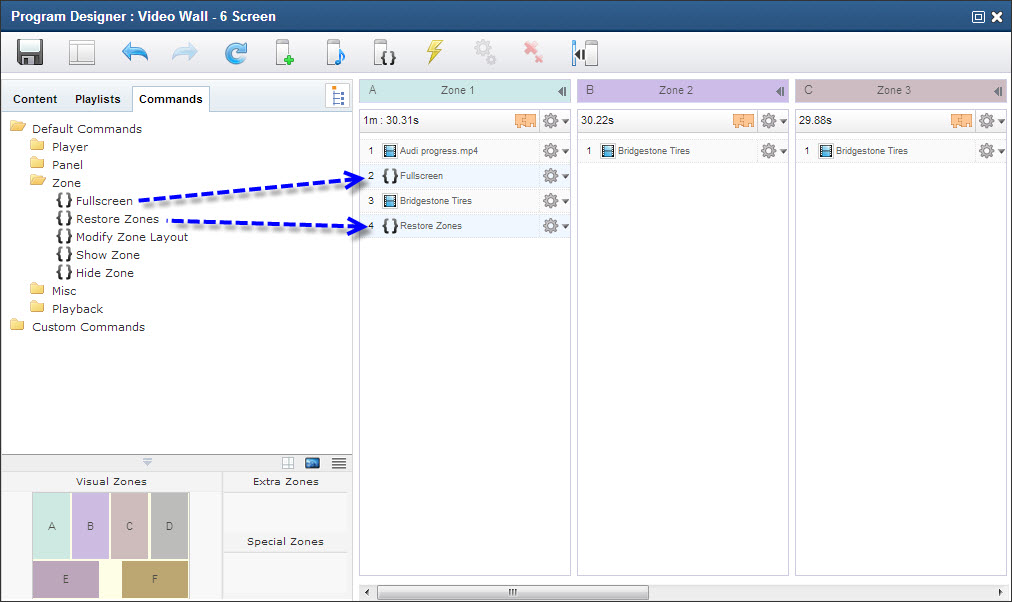 When synchronizing content between zones, avoid setting the content duration in the Sync zones to the exact same duration as the content in the Master zone.  Since the EnGage player attempts to “pre-load” content, the player will pre-load the next file and then load the file a second time once the end of the Sync zone file plays. This second loading of the file puts extra strain on the player resources and can cause undesirable playback “flash” between content.  Set the duration in the of the Sync zones to be two seconds longer then the Master zone duration to avoid this problem.

Synchronizing content between two or more zones is the perception that both zones begin playback at the same time. The EnGage player attempts to minimize the variation in start times and they may appear to begin at the same moment, but there is actually a very slight delay, measured in milliseconds, between the beginning time of playback in each zone.  Keeping this delay to as minimal as possible is the key to synchronized content, especially audio.

Our eye’s are less susceptible to seeing this delay then are ears are at hearing the delay. When audio is not perfectly synchronized, it is much more noticeable then video.  The key to synchronizing audio is to have only one source play the audio. If two or more videos with audio are being synchronized, mute the audio of the videos in the Sync zones.

Note:Synchronizing audio between two or more zones it not recommended.