When a message is selected from the Messages tab, the right side panel will display the message properties and a number of buttons to perform actions on the selected message. The buttons that are visible will depend on the role of the current user, the ownership of the message, the approval state and the features enabled for the network. 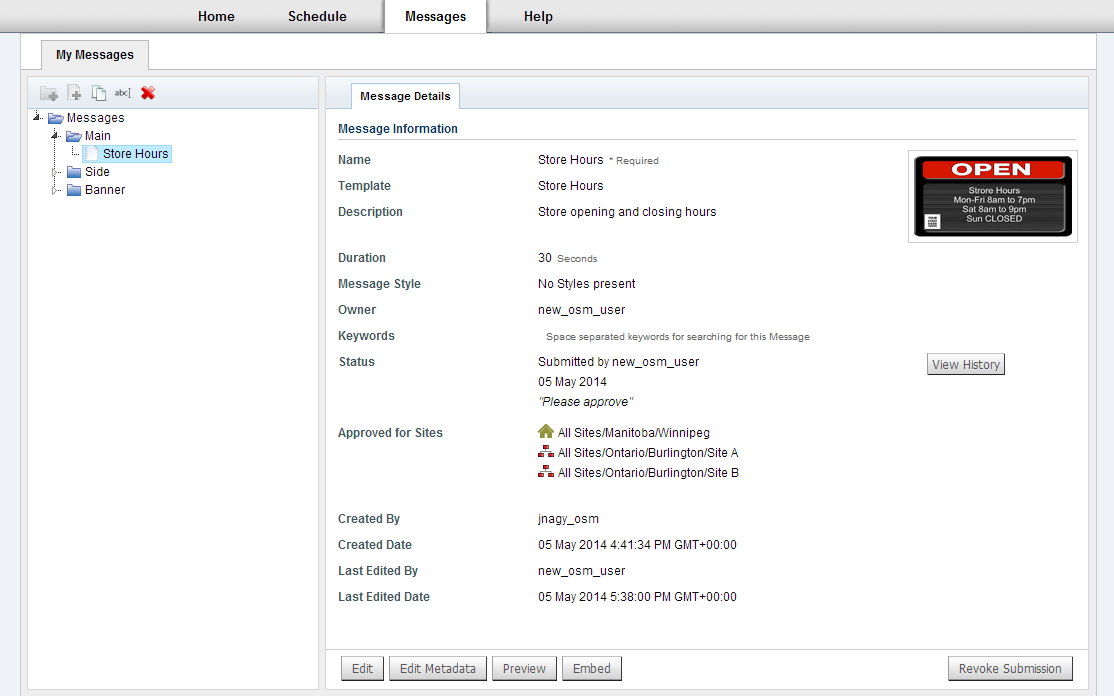 Name: The name of the message, which can be changed by clicking the Edit or the Edit Metadata buttons.

Template: The name of the template which was used to create the message. This cannot be changed.

Description: The description added to the message. This is an optional field for messages. It can be changed via the Edit, or Edit Metadata buttons.

Message Style: Some legacy OSM templates had various “styles” which could be selected when creating the message. For these legacy types of templates, the style can be altered by editing the template. The new templates created with the template designer do not contain styles.

Owner: Displays the current owner of the message. The owner of a message can only be changed by the current Message Owner or an OSM Administrator from the Edit Metadata button. See Message Ownership for more information about message owners.

Status: Displays the current approval status of the message, the date of when the status last changed, and a comment based on the last status change. See the Approval Status page for more information about possible approval states for a message.

Approved For Sites: Lists the site nodes for which the message has been approved. This status will change based on the approval of the messages for specific sites. This information is only relevant when the “Per message, per site” approval system is enabled by the ComQi staff. This option is enabled per network.

Created By: The username of who created the message. This value cannot be changed.

Created Date: The date and time of when the message was created. This value cannot be changed.

Last Edited By: The username of the user who last edited the message. The value changes automatically when a message is edited.

Last Edited Date: The date and time of when the message was last edited. This value change automatically when a message is edited.

View History Button: The view history button displays a history of the past approval states for a message. Within the history window, the date, status, and username of the user who changed the state will be displayed in chronological order from newest (top) to oldest (bottom). 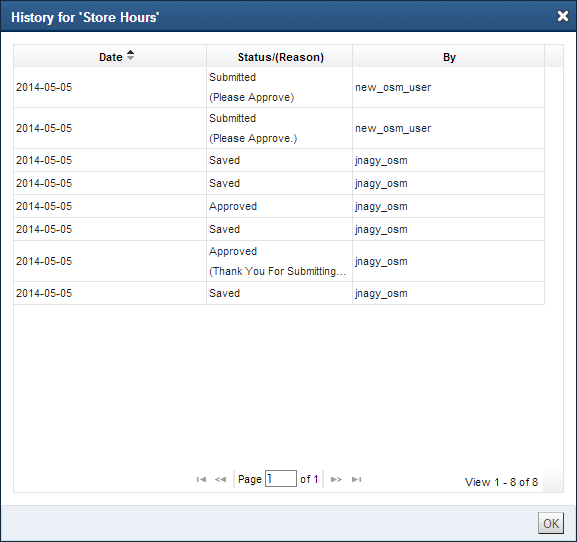 Preview Button: The preview button opens the message in preview mode. This preview shows the actual playback of the message with the exception of the duration.

Embed Button: The embed option will open a popup window that will contain the HTML code required to embed the message into a web page. The code can be copied and pasted into an HTML document for the purpose of displaying the current message on a web page. This is an advanced user option that should only be used by web developers. The embed option can be enabled per network upon require with the customer service team.

NOTE: Legacy style templates or custom Flash templates will not display properly when embedded into a web page.

Export Message Button: The export message option enables OSM Administrators to download the message as a ZIP file that contains all the components that make up the message. The ZIP could then be uploaded to the Admin->Templates area as a new template. This option is not available to OSM Users.

Approve Message Button: The Approve Message button enables users with the OSM Approval role to approve a message for distribution to the site for playback. This option is not available to any user that does not have the OSM approval role.

If the “approval per message, per site” option is enabled for the network, when the Approve Message button is clicked, a pop-up will appear showing the site hierarchy tree. Using the site hierarchy check boxes, check off the sites that should be approved for the message. By default, no sites are checked.  However, specific sites can be select which will only approve the messages for the checked sites. The message will not be approved for the unchecked sites. Intermediate nodes can be selected which will approve the message for all lower level site nodes.

NOTE: The “Approval per message, per site” option in enabled by the customer support team upon request. This is not a changeable setting available in the Admin->Settings tab. 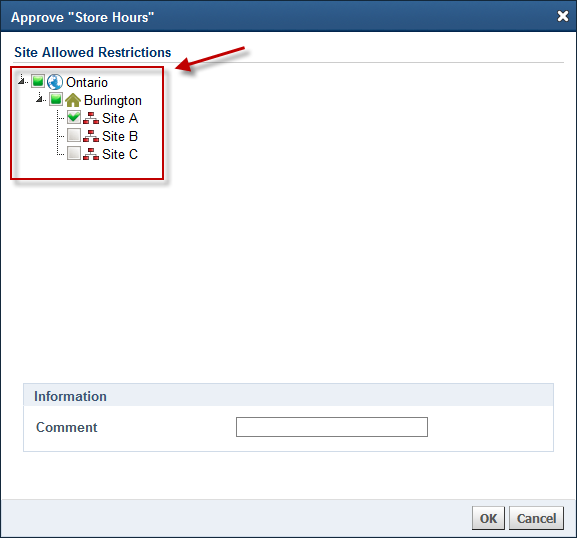