The settings tab is used configure the general OSM options and workflow settings. Be sure to review how each option works before deploying a network to understand how they impact the OSM user workflow.

Settings should be configured when a network is provisioned but should not be altered once a network is operational since it will impact the OSM user workflow and interface. Caution should be taken when making settings changes to existing operational networks.

NOTE: The per site customizable logo options are no longer available in OSM.

NOTE: All settings changes will not take affect for currently logged in OSM users and administers. The next time the OSM user or administrator logs into OSM the changes will be visible. 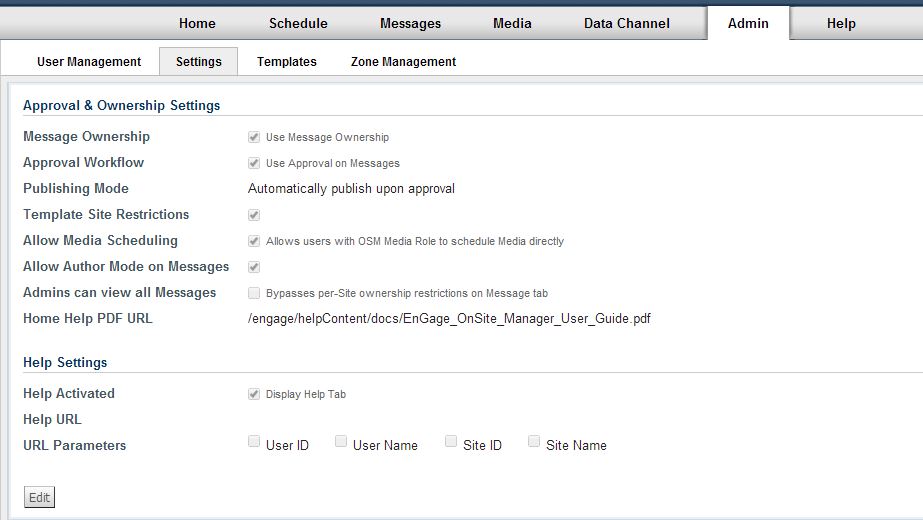 The approval & ownership settings enable OSM administers to customize the rules and workflow for OSM messages and templates.

As a best practice, these options should only be altered when provisioning a network. Changes to these settings on a live running network will alter what the OSM users see and their workflow for creating and publishing messages. When the Message Ownership option is enabled, messages created by an OSM user will be owned by that user. 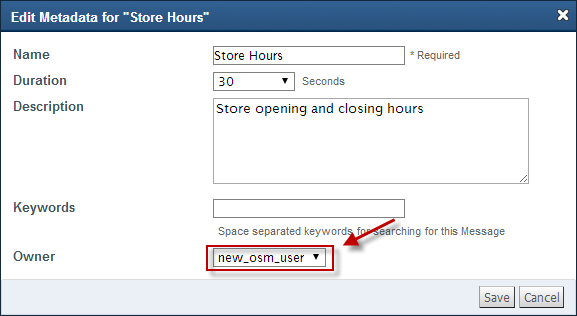 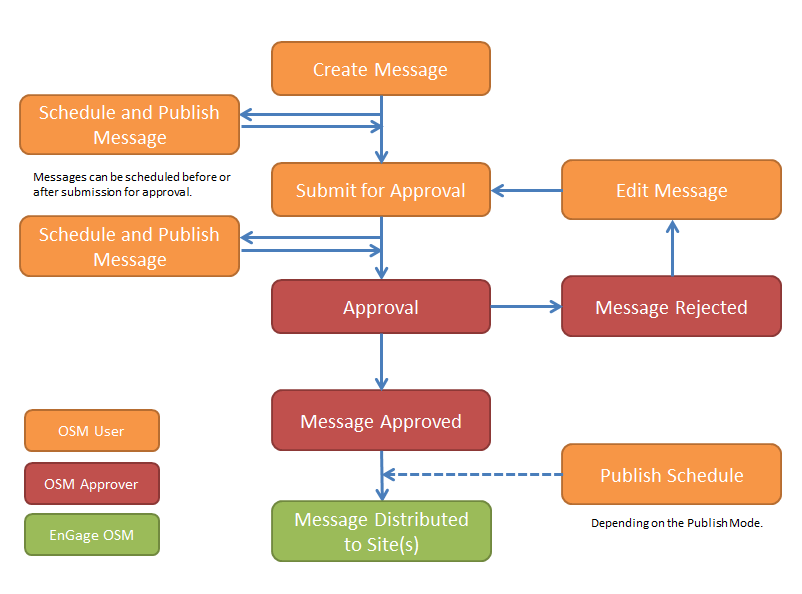 When using the approval workflow there are two types of OSM users required. The standard OSM User, which is assigned the OSM User Role, who creates and schedules the messages (based on the templates) and submits those messages for approval.

A second user known as the OSM Approver, which is assigned the OSM Approval Role, then reviews and approves or rejects the messages. The OSM approver has the ability to approve messages only for the sites to which the user has been assigned in the Admin->Users tab.

NOTE: In order for an OSM approver to see the messages submitted for approval in the Approval tab, the user must be subscribed to the “OSM Message Awaiting Approval” notification within EnGage Content Manager.

All roles are added to users from within the EnGage Content Manager under the Management->Users tab.

NOTE: The OSM Approver can also be an OSM Administrator, or not. Alternatively the OSM Approver role can be assigned to a standard OSM user. The assignment of roles to the users within the network is up to the decision of the network operator. Having multiple OSM approvers is also an available option. However, if two OSM approvers are logged into OSM and approve and reject the same messages at the same moment, errors may be seen within OSM.

In order for an OSM approver to see the messages submitted for approval in the Approval tab, the user must be subscribed to the “OSM Message Awaiting Approval” notification within EnGage Content Manager.

All roles are added to users from within the EnGage Content Manager under the Management->Users tab.